Pope Francis meets with community members of Rome’s Pontifical Latin American College, encouraging them in their pastoral work as Christ’s “disciples and missionaries.” 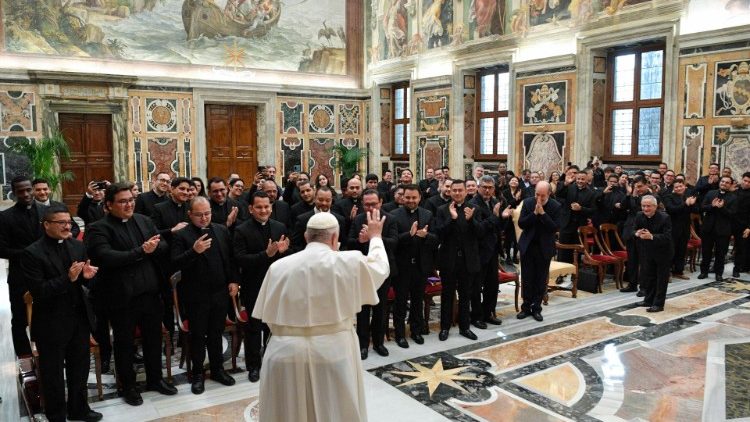 In his address he encouraged them to ask Our Lady of Guadalupe to help us in our journey of ‘discipleship-apostolate’ to which the Lord calls us, and to accompany us in the vital itinerary of ‘going and returning’ that starts from Jesus to the brethren, and then returns with the brethren to meet Jesus.

The richness of diversity
Speaking of the years of formation studies spent in Rome while living in community at the College, the Pope said this experience marks “a time of grace” that the Lord grants “to deepen formation, not only at the intellectual and academic level, but also in experiencing the richness and diversity of the universal Church.” He also recalled how this richness and diversity characterises the peoples of Latin America to whom they will return in shepherding the flock entrusted to them. The Pope also underscored their pastoral sensitivity and outreach, calling them to be always “pastors of the people.”

The example of early Christians
Even the first Christians came from different peoples and cultures, the Pope noted, emphasising how the Holy Spirit descended upon them and made them of “one heart and one soul” (Acts 4:32), speaking the same language – the language of love – and to be disciples and missionaries of Jesus to the ends of the earth (cf. Mt 28:19).

Recalling the Apostle Andrew, whose liturgy will be celebrated on 30 November, the Pope then focused on the importance of being the Lord’s disciples and missionaries.

Regarding the role as disciples, he said this means that Jesus has an active voice in our every decision, as we are his ministers and are called to “be with Him.” Speaking off the cuff, the Pope reminded them to pray always, even when tired, and to put down the mobile phone, especially it can become an addiction or escape causing us to miss opportunities to be with the Lord and hear what He has to say to us.

Avoid spiritual worldliness
Pope Francis again urged everyone to remember the importance of their pastoral service to the People of God and avoid any type of clericalism, to remember their roots, and to “ask for the grace to know how to always be in front, in the midst and behind the people” they serve and the communities from which they hail.

Missionary role of Saint Andrew
Speaking of the witness of Saint Andrew, the Pope recalled how as one of Jesus’ first disciples his life changed radically after meeting the Lord. “He was no longer the same as before, and had to go and tell everyone what he had experienced.” In this way, Andrew “made his debut” as a missionary, the Pope pointed out.

In a similar way, “our brothers and sisters are also waiting for us, especially those who have not yet experienced the love and mercy of the Lord, so that we can proclaim the Good News of Jesus and lead them to Him. Go out, be on the move, bring the joy of the Gospel, that is, be missionaries.”

“This is the meaning of our life. It is an “outward and return” journey, which has Jesus as its starting and ending point. Let us not forget that ‘being’ with Jesus and ‘going out’ to proclaim Him also means accompanying the poor, migrants, the sick, prisoners, the least and most forgotten in society, to share life with them and to announce God’s unconditional love. Because Jesus is present in our most vulnerable brothers and sisters, and there He waits for us in a special way.”—Vatican News