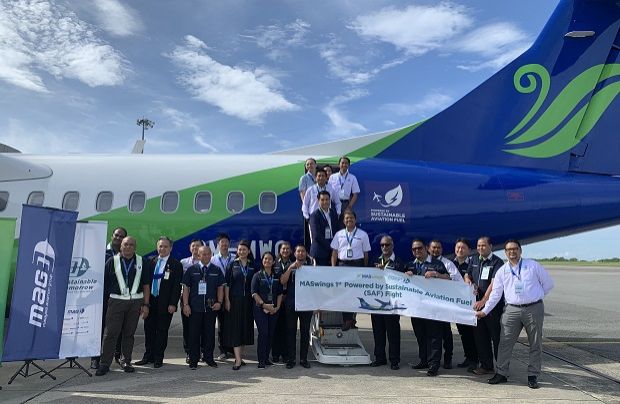 Flight MH3043, using an ATR72-500 aircraft, took off here on Thursday (Dec 1) for Labuan at 10am with 40 passengers on board and continued to Miri, Sarawak via MH3223 at 11am with 44 passengers, said the Borneo regional carrier in a statement.

“Today’s first SAF on passenger flights operated by MASwings marks a significant milestone in creating a more sustainable operating environment and to achieve the group’s target of net zero carbon emissions by 2050.

“Without these crucial first steps, we will never be able to progress.

“I applaud our team’s efforts as it demonstrates our commitment to a ‘sustainable tomorrow’ by ensuring that its services and operations in Sabah, Sarawak and Labuan meets the aspirations and expectations of the government and the public,” said MASwings chief operating officer Captain Nasaruddin A. Bakar.

All passengers on the flights were given special souvenirs of upcycled goods handmade by the MAG team.

In line with MAG’s sustainability journey which is guided by the group’s sustainability blueprint launched in April last year, the initiative by MASwings adds to a series of SAF flights launched starting with the country’s first cargo and passenger flights using SAF.