KUALA LUMPUR: Prime Minister Anwar Ibrahim promised a unity government to stabilise the country. Now he needs to find a finance minister who can steer the economy and help him hold onto power.

His pick must present a budget next month that can shield Malaysia’s fragile recovery amid concerns of a global slowdown next year. Inflation is elevated and the still-weak currency has made living costs untenable for low and middle-income households.

The job, which involves overseeing big projects to boost the economy and setting strategy for Malaysia’s state investment funds, is widely seen as training ground for future prime ministers. Past leaders at times have appointed loyal technocrats or simply taken on the finance portfolio themselves.

There is no reason to pick a political nobody, “except in the case where the prime minister wants to stay in charge”, said Woo Wing Thye, professor emeritus at University of California in Davis who focuses on East Asian economies.

“The finance minister’s job is to identify good projects and have the political standing to be able to push what he thinks to be the right economic stance for the government,” he added.

Anwar has numerous candidates to consider given he heads a coalition made up of at least four political groups. Here’s a look at the top candidates: 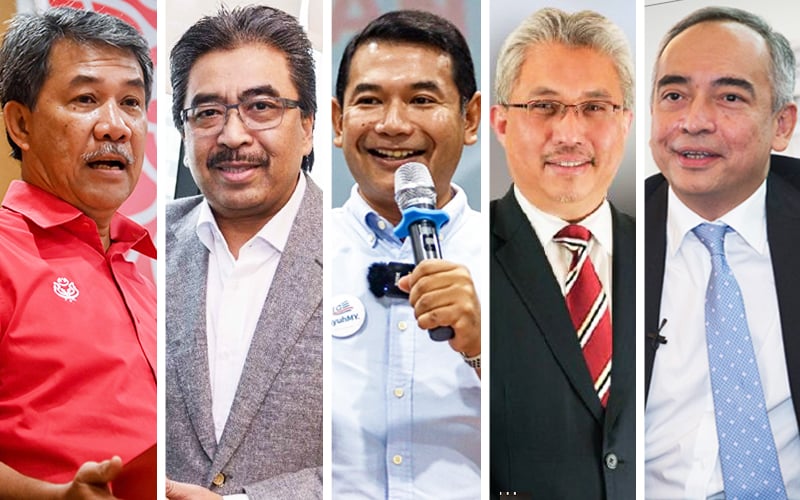 (From left) Mohamad Hassan, Johari Abdul Ghani, Rafizi Ramli, Azman Mokhtar and Nazir Razak are among the contenders for the finance minister’s post.

Mohamad Hasan is the deputy president of Umno, the linchpin of Barisan Nasional that joined Anwar’s government last week. He had a 25-year career in banking and the corporate sector before being elected to public office in 2004. He served as menteri besar of Negeri Sembilan, where he was credited with reducing the state’s debt and boosting economic growth.

Mohamad was the election director for the Umno-led BN and actively pushed then prime minister Ismail Sabri Yaakob to call for snap elections so it could capitalise on a string of local poll victories.

BN lost significant ground and Mohamad was initially reluctant to join Anwar’s government. Several BN MPs have publicly said he should be one of Anwar’s two deputy prime ministers.

A trained accountant, Johari Abdul Ghani is best known for running fast-food franchise KFC Holdings in the 1990s. He is a long-time Umno member and came to the forefront when he won a seat in Kuala Lumpur in 2013. Three years later, then prime minister Najib Razak named him second finance minister as part of a Cabinet reshuffle.

Even though Najib held primary control over federal finances, it was Johari who spoke publicly about the escalating crisis of 1MDB and its billions of dollars of debt. He has helped buy over Umno’s stake in companies like KUB Malaysia in 2019 to help the party stay afloat after some of its bank accounts were frozen in relation to 1MDB.

Johari lost his Titiwangsa parliamentary seat in 2018 but won it back in last week’s election as he was seen by the majority Malay voters there as a capable administrator.

Rafizi Ramli was swept up in the “reformasi” movement protesting against Anwar’s sacking as deputy prime minister in 1998. He worked as an accountant with state oil and gas producer Petronas for about six years before quitting to focus on politics with Anwar and PKR.

He was elected to Parliament in 2013 and focused on exposing corruption related to Najib and his government, including 1MDB. His revelations helped fuel public anger against Umno and led to its historic defeat in 2018, though he was ineligible to defend his Pandan seat as he was appealing a jail sentence for leaking contents of a 1MDB audit report. He was acquitted in 2019.

Rafizi returned to the political fray earlier this year. His team swept most of the positions in PKR and he now holds its powerful deputy president’s position.

Azman Mokhtar worked at Malaysia’s electric utility TNB and cycled through a series of finance jobs before taking the reins of the sovereign wealth fund, Khazanah Nasional Bhd, in 2004. He is the longest-serving managing director of the fund, which is owned by the finance ministry, making him well acquainted with the inner workings of government.

He oversaw the fund’s international expansion and led investments in healthcare, technology and creative industries while formulating deals to invest in an assortment of local companies. From mid-2004 through 2017, it notched average annual compound gains of 9.6%, trailing the 10% return of the KLCI Index.

Azman was regarded as part of Najib’s inner circle, advising him on the economy and capital markets. After Umno’s historic defeat in the 2018 elections, Azman and the Khazanah board stepped down. They had come under scrutiny by Dr Mahathir Mohamad, who became the prime minister a second time and said the fund invested in too many companies.

Nazir Razak is the son of Malaysia’s second prime minister, Razak Hussein, and the younger brother of Najib. He joined CIMB in the late 1980s and oversaw its rapid expansion, including a hostile takeover of Southern Bank.

After stepping down as CIMB CEO in 2014, but keeping the chairman’s role, Nazir became increasingly critical of the government’s handling of 1MDB and its impact on Malaysia.

The country needs to “fix our moral compass and deal with our structural problems”, he said in 2016. Shortly after, he took a leave of absence while CIMB probed a US$7 million transfer to his personal bank account from Najib, which had surfaced as part of the scandal. He was cleared and remained chairman until 2018.

Nazir has said he wants to broaden policies that now favour the Malays to also benefit ethnic groups in the lower-income bracket. He is in the mix as many in corporate Malaysia regard him as a known entity who understands what is needed to restart the economy.

Loke Siew Fook was widely liked by Malaysians across the political spectrum when he was transport minister under Mahathir’s short-lived administration from 2018. That is because he played a big role in renegotiating costly infrastructure contracts struck under Najib’s government and making public transport more efficient.

Holding the powerful secretary-general’s role in DAP – the largest in Anwar’s coalition – Loke is well positioned to get a key Cabinet role. However, DAP is likely to defer Cabinet positions to Malay MPs to ensure the coalition remains stable.

The newly appointed prime minister told reporters last week that he is not considering taking the role, at least at the moment. But such decisions can change and, after all, Anwar’s predecessors Najib and Mahathir both took charge of the state finances towards the end of their reigns.

Anwar was finance minister in Mahathir’s Cabinet for seven years and got fired at the height of the 1998 financial crisis after a falling out with his boss over the economy, in particular foreign exchange and capital controls. Mahathir wanted a low interest rate environment with more spending while Anwar advocated a tighter monetary policy with austerity measures.